I really needed to get some non-theology reading material too keep my brain from exploding and burning out. So I checked out the Novelization of Star Wars IV: A New Hope a couple of months ago. Loved it. Since then I have been browsing the hundreds of books that have official or unofficial (or as I have heard it termed books that are "canonical" or "non-canonical" in the Star Wars universe) status in the Star Wars world. So my question is: Where should I start?

Good question. I am also interested in the answer as one of my sons recently got a few of the books from the library.

This is the best that is written and you will not put them down! Be warned!

This is the best that is written and you will not put them down! Be warned!
Click to expand...

Amen brother. I would also recommend the Kevin J. Anderson novels. The X-Wing series by Stackpole is pretty enthralling as well.

I have 55 of the (canonical) Star Wars novels which I read over and over again all the way through high school.

Thanks for that recommendation, I love the universe, but, some of the recent ones, I tried to get into, "The Legacy of the Force" series, not bad, but, didn't hold my attention.

I really liked the Han Solo Series, one of the earlier ones I believe, short, very fun reads. It provides the origins of Solo, and it's a fast read.

I'm forgetting the titles, one is "Paradise Snare".

I also like, and am still going through, "Tales from Mos Eisley Cantina". I often will find books filled with short stories, like the Robert E. Howard books, since I don't always like to be locked into a novel, but love the quick escapism these books bring.

If you ever want fun short reads with a rogue puritan adventurer, try out Robert Howard's "The Savage Tales of Solomon Kane". A bit graphic.

You need to find good historical novels, not the sci-fi stuff 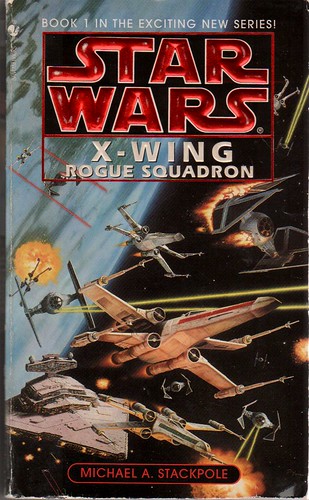 I started with this series and have been hooked from the start. I also reccomend this book:

truce at bakura is great because the storyline takes places within a day of the battle of endor.

Absolutely should you start with Zahn. Zahn, years after "Splinter of the Mind's Eye" (which is a curious little novel since it was written before ESB was released and contains a romantic sub-plot between Luke and Leia), was the first to write EU novels, and they're brilliant. The Thrawn Trilogy takes place five years after Endor. The Hand of Thrawn duology is a great sequel to that series and takes place some years later. Both are amongst my favourites.

I also second (third?) the nominations for the X-Wing novels. I love them. The first four books follow Rogue Squadron, the following few follow the adventures of Wraith Squadron, and the remaining two come years later, one centres on the Rogues but includes the Wraiths, and the last follows just three of the Rogues on a special mission. Along with the novels go the graphic novels, which are fun, though of varying quality. Still, they're about X-wing jockeys, so how can you go wrong? They take place shortly after Endor, whereas the novels take place a couple of years after Endor. Dark Horse has reprinted them recently in omnibus collections, and there are three of those.

To really understand "Legacy of the Force", you have to read "The New Jedi Order", first, which is a massive undertaking at 19 novels. It's about 25 years after Endor (that, or it's 25 years after Yavin; I can't remember which), and you really should read the older stuff first as the EU is pretty established by the NJO.

I, personally, find "The Truce at Bakura" to be more interesting for its "historical" value, but it is one of the weaker novels (though no where near as bad as the Blackfleet Crisis, for example). In the same line as Truce is "The Courtship of Princess Leia", which is definitely a piece of EU that should be read at least once, but not one of the absolute must-reads. And yet another in that line is What's-It-Called(!) (sithspit, since I'm not at home, I don't have them handy), but it takes place in between ESB and ROTJ, and so it's interesting for the story of what goes on while Leia and Co. are trying to track down the frozen-in-carbonite Han Solo. These three are nice to have (or at least read) for filling in back story, but they're definitely not the strongest EU offerings.

D
Roman Catholic apologists on the Canon of Scripture