Purpose Driven or God-Led? They are not the same and you must choose!

The controversy continues! The mess called Purpose Driven continues to garnish both praise and condemnation.

The most recent situation in my area, which spread across the nation somewhat, is an article by Bible professor, pastor, radio talk show host and columnist Matt Friedeman. Matt is based in Jackson, Mississippi and host a daily radio show on American Family Radio in addition to a column on AFA´s website.

His most recent contribution is entitled "œWhere do I stand on Rick Warren?" In his column Freideman writes, "œDespise him?(Warren) Only if you are jealous. Or you have some kind of quibble with his use of technology and contemporary music and the fact that he never buttons up for a church service. Time for some of us to grow up and get over it."

It is obvious, and disappointing, that Dr. Freideman has endorsed PDL so enthusiastically, and to tell you the truth I was kind of shocked to learn of his position. What´s more disappointing is the fact that he tries to make this a situation of immature believers attacking Rick Warren personally. Nothing could be further from the truth and to make such assumptions are totally inaccurate and irresponsible.

I do not know Dr. Freideman personally but I have had some exchanges with him professionally. I have admired his work very much especially in his stands in support of the sanctity of life. I have listen to his radio show many times and have learned a lot from it. In fact he was a guest on my radio show once. But he is way off base on this issue and has received major feedback on it. It was encouraging for me to read of so many who also see the error in PDL and that I am not alone.

Rick Warren or not, the Purpose Driven church growth movement is false teaching and should be opposed. It´s shallow and incomplete doctrine, it´s cavalier handing of scripture, its market-driven secular methodology and its replacing of the Bible with the PDL books clearly proves that it is not of God and should be avoided.

Now, more specific details have come out that Rick Warren personally associates with and collaborates with in ministry, proponents of new age teaching and philosophy such as Neil Donald Walsh, Ken Blanchard ,Robert Schuller and many others.

Recently at a kick-off for his global PEACE plan, he opened the "œfestivities" with a personal rendition of Jimmy Hendrix´s "œPurple Haze" in which the church band played back up for him.

Come on people, how much more do we need to see or read to realize that this man is a false prophet and is deceivingly leading so many down a road of false salvation.
I continue to be amazed and saddened at how so many have fallen hook, line and sinker for this PDL/seeker sensitive garbage. But then I think that if something came along that would allow people to live anyway that want to, not have to be concerned with such things as guilt and shame and sin, and then also give them God´s approval, then what sinner, and apparently some so-called saints, would say no to that.

I have been extremely hesitant before today to declare Purpose Driven/seeker sensitive heresy. But now I am fully convinced. This philosophy, doctrine, movement, whatever you want to call it is not of God and is heresy and its prophets are false.

In the love of Christ and in all Christian compassion, I call upon those who teach and promote this false doctrine, and those who follow it, to repent and turn to God through the Lord Jesus Christ while there is still time to do so.

I used to go to a church that was infected with that stuff. They kept telling me in so many words that I was just an old fogey, (moi, the Deadhead?) and saying it was all about stylistic objections. That got so wearying, I finally wandered out of there and found better pasture, by the grace of God. All that theological jimson-weed, blechh!
A

There's a very important picture on my blog pertaining to Warren. Click the link below in my signature. Scroll down a few posts...

Arminianism is also something we need to be concerned with, but just like dispensationalism, in my opinion it isn't a salvation issue.

The "seeker sensative" or "Purpose Driven" bunk just may be a salvation issue. I am not prepared to challange Rick Warren's salvation (yet) but I am convinced that this entire system is leading many down the borad path of destruction while promising salvation.

I see this issue as something we can all unite against. By all I mean Arminians, Calvinists, Covenant believers, and dispensationalists. We can debate the other issues along the way, but this "PD" stuff has got to be sent back into the pits of Hell from which it came.

Originally posted by ARStager
There's a very important picture on my blog pertaining to Warren. Click the link below in my signature. Scroll down a few posts...
Click to expand... 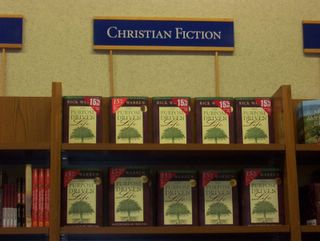 That's the one.
R

Originally posted by ARStager
There's a very important picture on my blog pertaining to Warren. Click the link below in my signature. Scroll down a few posts...
Click to expand...

Too bad we don't live closer....I play the harp and it sure sounds neat as "arty acoustic" moosic....I'll send you a link, if you want. Did you the know White Horse Inn is taking music submissions? Complements on your site, btw!

We've said it before....below is a great link to an analysis of the PDL teaching...as it relates to using The Message. You're right, it is so subtle and dangerous....because at the heart of all of it is what words really mean. With all those translations PDL throws out, it's utterly overwhelming to lock-down what is really being said. (Yet, look at the real "fruit.") Out here, where Mr. Saddleback lives, it's common knowledge that the "flock" in Saddleback neighborhood is far from a true Christian representation. They're getting ready for a huge "PEACE" plan extravaganza at the stadium! Loud = Excitement = proof the Holy Spirit is blessing. The New Age/mystic tint in Warren's meaning is ever increasing.... he makes sure to avoid direct accountability for what he means by what he says. (He never answers questions clearly.)

If we continue to study to show ourselves approved....the True Gospel will slay this false teaching. We have work to do....

Another site for PDL refutations is:

This is a great site for John MacArthur, Spurgeon and Ryle stuff.

Highly Recommended -- 5 out of 5 dancing banannas!!!

The Adulation of Man in The Purpose Driven Life

Is Your Church Going Purpose Driven?
2