Popular Works dealing with Jesus' Fulfillment of the Law

All I know of that is mildly "popular" audience wise.

"Eschatological Fulfilment and the Confirmation of Mosaic Law" by Greg Welty

A critique of D.A. Carson's view and rejection of the perpetuity and binding nature of the moral law.
www.the-highway.com

You could probably find most of what you are looking for in these books: 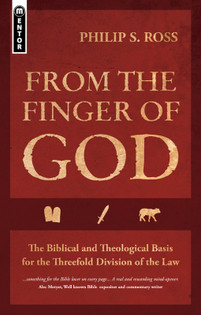 From the Finger of God: The Biblical and Theological Basis for the Threefold Division of the Law (Ross)

I have not read Ross's book but have heard good things.

A Treatise on the Law and the Gospel (eBook) | Monergism

by John Colquhounin ePub, .mobi, .pdf The subject of this treatise is, in the highest degree, important and interesting to both saints and to sinners. To know
www.monergism.com

Regi Addictissimus said:
I have not read Ross's book but have heard good things.
Click to expand...

I have this one already and he has an entire section on Matt 5:17-20 which is really helpful.

RobertPGH1981 said:
I have this one already and he has an entire section on Matt 5:17-20 which is really helpful.
Click to expand...

Are you interested in how various Church Fathers expounded those verses?

Regi Addictissimus said:
Are you interested in how various Church Fathers expounded those verses?
Click to expand...

Yes... looking at changes throughout history. I was looking at Irenius and I hear Thomas Aquinas had opinoins on this too.

RobertPGH1981 said:
Yes... looking at changes throughout history. I was looking at Irenius and I hear Thomas Aquinas had opinoins on this too.
Click to expand...


Do not claim that I came to abolish the Law and the prophets: I came not to abolish but to fulfill. The power and authority of these heavenly words contain a lofty significance. For the law of works was established and encompassed everything pertaining to the faith that would be revealed in Christ: both his teaching and his suffering, the eminent and profound decision of the Father’s will. Moreover, under the veil of spiritual words, the Law spoke of the Nativity of our Lord Jesus Christ and of his Incarnation, and of his Passion, and of his Resurrection. It was decreed even before the times of the ages and the time of our age, frequently mentioned by prophetic and apostolic authority.
After the period of fasting for forty days, Satan—who was troubled with much suspicion—undertook the very bold move of tempting Jesus because he feared in him the mystery of great heavenly preparations. In fact, “Jesus” is the name given to the flesh of our Lord. And so both his Incarnation and his suffering are the will of God and the salvation of the world. It is beyond the eloquence of human speech to describe how he is God from God, Son of the Father’s substance, and dwelling within the substance of the Father, how at first he was incarnate as man, then subject to death in his human condition, how after three days he returned from death to life, how he brought to heaven the matter of the body that he assumed, already united to the Spirit and in the eternality of his substance.

15. Lest we should think that there is in his works anything that is not contained in the Law, he declared that he did not come to abolish the Law but to fulfill it. Whereas heaven and earth, the greatest of elements as we imagine, will be destroyed, it is still not possible for the least of the commandments of the Law to be left uncompleted since all the Law and the prophets are fulfilled in him. During his Passion and on the verge of delivering his spirit, no less certain of this great mystery within him, he took a drink of sour wine and declared that all was finished. Everything that was once spoken by the prophets was summed up in the affirmation of his deeds. And so it was established by God that not even the least of the commandments of God should be abolished (except [the statutes] concerning sacrifice). He warned that those who abolish the least of these will be the least; that is, they will be last or of no account at all. For no one can be less than those who are the least.
And yet the suffering of the Lord and his death on a cross are the least of all. If anyone will not acknowledge it, as if he were ashamed of it, he will be the least. But to the one who acknowledges it, there is promised the glory of a great calling to heaven.

5:17. “Do not think that I have come to destroy the law or the prophets; I have not come to destroy but to fulfill.” This means either that he fulfilled what was prophesied about himself through others, or that by his own preaching he has fulfilled the things that previously had been rough and imperfect, owing to the weakness of the hearers, removing wrath and the law of retaliation, excluding even the lust hidden in one’s heart.
5:18. “Until heaven and earth pass away.” A new heaven and a new earth are promised to us, which the Lord God is going to make. Therefore, if new things must be created, it is consistent that the old things are going to pass away. But as for what follows:
5:18. “Not one jot or tittle shall pass away from the law until all things are done,” by a figure of the letter it is shown that even the things that are thought to be least in the law are full of spiritual mysteries, and that all things are recapitulated in the gospel. Who then possesses the erudition and learning to demonstrate how even the various sacrifices, which seem superstitious, are daily fulfilled in victims?
5:19. “Whoever destroys one of the least of these commands and so teaches men shall be called least in the kingdom of heaven; but whoever does them and teaches them shall be called great in the kingdom of heaven.” This section is rooted in the preceding testimony in which he had said: “Not one jot or one tittle shall pass away from the law until all things are done.” Therefore, he is taunting the Pharisees who despised God’s commands and were establishing their own traditions. He means that their teaching among the people is of no benefit to them, if they destroy even a little bit from what was commanded in the law. We can also understand it in another way, that the learning of a teacher, even if he is guilty of a small sin, demotes him from the greatest position. Nor is it advantageous to teach a justice that the smallest fault destroys. Perfect blessedness is to fulfill in deed what you teach in word.

Cyril of Alexandria commenting on John 7:18, “The one who speaks on his own seeks his own glory.”

He gives this clear indication that he is not at all working for his own glory by his teaching and that he does not use any strange words foreign to the law, since that would be speaking “on his own.” Instead, he is advising them to follow what has already been prophesied. He is merely removing the useless and coarse shadow of the letter and persuasively transforming what already lies hidden in types into the spiritual sense. That is what he says also in the Gospel according to Matthew: “I have not come to abolish the law, but to fulfill it.” Here he hints at this obliquely. The gospel way of life entails merely a transformation of the letter into truth. And since it has transformed the Mosaic type into something more fitting, it has the knowledge of worship in the Spirit. Christ then is not speaking “on his own,” that is, he is saying nothing foreign to what has already been foretold. He does not send Moses away, after all, nor does he teach people to reject the instruction in the law; instead, he teaches them to take what is sketched in type and fill it in with the truth, as with a brighter color.

You can read Chrysostom's homily on this verse here:

I can send you R. T. France's exposition when I have more time.

There is a small book by Dr Don K Preston "Have Heaven and Earth passed" on this very topic. He is Full preterist so one should read with discernment. It is available from Amazon

The Distinction Between Law and Gospel by Wilhelmus A Brakel

The Difference Between the Law and the Gospel

The Mystery of Christ: His Covenant & Kingdom: Typology
2