* 1689 -- Episcopacy was abolished by the Scottish Parliament;

* 1712 -- Auchensaugh Renovation of the Scottish Covenants;

* 1550 -- Founding of the French Protestant Church of London;

* 1869 -- England's Disestablishment Bill is passed, officially dissolving the Church of Ireland. It is from this act that we get the mighty word "antidisestablishmentarianism," which was the organized opposition to the legislation.

* 1893 -- First presbytery meeting of the Free Presbyterian Church of Scotland; 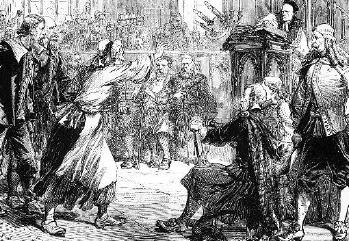 Richard Cameron: "œLord, spare the green and take the ripe."

After Richard was killed in battle, his father Allan was presented with his head and hands while he was in prison and the soldiers asked him if he recognized them.

"I know them, I know them," he replied. "They are my son's, my dear son's. It is the Lord. Good is the will of the Lord, who cannot wrong me nor mine, but has made goodness and mercy to follow us all our days."

Source: Maurice Grant, The Lion of the Covenant: The Story of Richard Cameron, pp. 285-286

* The article says that he died in 1936, but he actually died on January 1, 1937. The article also refers to him as a "fundamentalist" but he is known for this famous statement:

I never call myself a "Fundamentalist." There is indeed, no inherent objection to the term; and if the disjunction is between "Fundamentalism" and "Modernism," then I am willing to call myself a Fundamentalist of the most pronounced type. But after all, what I prefer to call myself is not a "Fundamentalist" but a "Calvinist""”that is, an adherent of the Reformed Faith. As such I regard myself as standing in the great central current of the Church's life"”the current which flows down from the Word of God through Augustine and Calvin, and which has found noteworthy expression in America in the great tradition represented by Charles Hodge and Benjamin Breckinridge Warfield and the other representatives of the "Princeton School."
Click to expand...

Originally posted by VirginiaHuguenot
On July 26,

One of my ancestors and namebearers, Sir Matthew Sutcliffe (c. 1550 - 1629) served as a royal chaplain under her Majesty Elizabeth I and His Majesty James VI, and was installed as Dean of Exeter in 1588, a post he held for more than forty years. Matthew was born in Yorkshire, the family's ancestral home since the 1300s. He was educated at the prestigious Cambridge University, and also received his Doctor of Laws degree from Trinity College in 1581.

Sir Matthew Sutcliffe was a renaissance man and a scholar who wrote many works on subjects of divinity, law, and military strategy. Matthew was an High Anglican, but a Calvinist as well, as I have seen his written criticisms of Romanism and Arminianism. In fact, he was a stalwart Reformed Protestant, and was the patron and protector of several Puritan ministers. (Ultimately, a lot of my Sutcliffe family gave up on the Anglican church a generation later and became Congregationalists, and many were Puritans in the New World.)

Matthew founded a divinity school, under the charter of King James I, which very well trained some of the Westminster divines. And when King James I incorporated this college to be called by his name at Chelsea, in 1610, Matthew gave considerable funds to the project as well. He was appointed provost by His Majesty. Its fellows were to be "men of war" dedicated to polemical studies. Besides the study of divinity, two historians were to be maintained, "to record and publish to posterity all memorable passages in Church and Commonwealth." The college regrettably was seized by Parliament during the interregnum. Samuel Hartlib, in 1655, lamented its confiscation in a letter, declaring: "Bishops and Deans are gone," he says. It would be a scandal, if "we betray or destroy an incomparable engine already prepared ... for the defence of the Truth."

Matthew invested heavily in the Plymouth Adventurers Colony which attempted to found a colony in Sagadahoc, Maine, which summarily failed. Merchant ships later came to Maine to establish fishing communities with differing degrees of success, but there was a lot of fighting over rights and charters by investors back in England. Though, he was involved in subsequent ventures, and he was a personal friend of Sir Walter Raleigh. Some of my ancestors in the New World were early patrons of Harvard University. Many initially settled in Scituate, Massachusetts.

In fact, Matthew's name is mentioned in the 1620 Charter of New England Confederation, as "...our well beloved Matthew Sutcliffe, Dean of Exeter, ..."

Matthew Sutcliffe´s popular treatise on military science appeared in 1593, entitled the Arts and Usages of War was popular in its time. In dedicating his work to the Earl of Essex, he stressed his strong belief that "with exercise of armes and observance of true discipline of war great enterprises most happily are achieved." In fact, the U.S. Navy Historical Archives has a copy.

His brother John served under the orders of Lord Howard of Effingham, during the attack of the Spanish Armada. John was Groom to the Bedchamber of His Majesty Charles I (i.e. the bad Catholic king who was executed.)

This Realm, This England!!!
This royal throne of kings, this sceptred isle,
This earth of majesty, this seat of Mars,
This other Eden, demi-paradise,
This fortress built by Nature for herself
Against infection and the hand of war,
This happy breed of men, this little world,
This precious stone set in the silver sea,
Which serves it in the office of a wall
Or as a moat defensive to a house,
Against the envy of less happier lands,--
This blessed plot, this earth, this realm, this England.
"”William Shakespeare (1564 - 1616), "King Richard II", Act 2 scene 1
Click to expand...

I need to write his formal wikipedia entry. My dad has two of our genealogy books from the turn of the century which I can use as a source. I have found out stuff from sources outside of those books as well.
V

You may have already seen this but there is a little biographical sketch about him here. I would be interested to which Puritan ministers were under his patronage and protection.
P

You may have already seen this but there is a little biographical sketch about him here. I would be interested to which Puritan ministers were under his patronage and protection.
Click to expand...

Not that too many people care outside of my family, but some of that information there may be suspect at least as it relates to the supposed Flemish merchant Gamel, though he did exist. Some of it appears in the genealogy sources I have. In fact, Gamel was from the Netherlands. But the thing was, the Sutcliffe family supposedly has an established record in the 1200s before Gamel's arrival, and it was spelled "Sutcliffe" (derived from a geographic origin, Southcliffe) even at that time. Plus, the records are a little fuzzy 700 years ago, and it is conjectured that Gamel merely adopted the Sutcliffe name. It's tough to say, and I do not have access to records that go back 700+ years. According to one source, the Sutcliffes were tied by marriage to the descendants of King Alfred, and had deeper roots in the English nation as it was just taking form.

Originally posted by VirginiaHuguenot
I would be interested to which Puritan ministers were under his patronage and protection.
Click to expand...

I know that he was a patron of Captain John Smith. I can look it up, as I have ran across a few names before, but know none off-hand.

Then there is the black sheep of the family, Joseph Sutcliffe (1762-1856) of England who was converted by John Wesley to the Methodist movement. He introduced Methodism into the Scilly Isles in 1788 off the coast of Cornwall. His commentary is featured in the Wesleyan Heritage Collection from Ages Library. Fortunately, I claim no descent lineal from him, as my American branch of the family was well-estabished at that time.