Born in Leicestershire and educated at Cambridge, Latimer was at first antagonistic to the Reformation in England. He was coverted in his thinking under the influence of Thomas Bilney, one of the leaders of a group of reformed theologians who met for discussion at the well-known White Horse Tavern. Latimer quickly became one of the leading spokesmen for the Reformation.

Latimer was chaplain to King Henry VIII and, in 1535, was made Bishop of Worcester. However, his reformed views led to charges of heresy, and he endured two brief imprisonments during times when Henry reacted against reform.

Latimer is best known as a powerful preacher, and he was a favorite preacher in the royal court under Edward VI. He placed great emphasis on the reading of Scripture and is thought to be the author of the homily "A Fruitful Exhortation to the Reading of Holy Scripture," in the First Book of Homilies.

Arrested during the persecution of Reformers under Queen Mary, Latimer, along with Nicholas Ridley, was burned at the stake, in Oxford, on October 16, 1555. As the fires were lit, Latimer cried out to his companion, "Be of good comfort, Master Ridley, and play the man. We shall this day light such a candle by God's grace in England as I trust shall never be put out!

He was a faithful man of God. There is a good bio here.
V

Hugh Latimer said: "Take away preaching, and take away salvation." The sermon in which he said this can be found here.

I know the Latimer family! I correspond with some of them via e-mail and at church meetings....

Staff member
His is a great story of Reforming and then Reforming some more. Even to the point of death. I thought he never married.

I heard some of his family are out in Colorado. 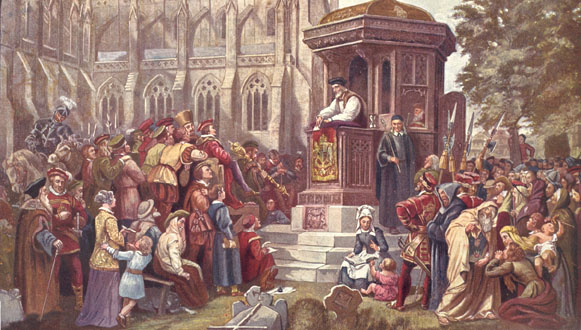 Hugh Latimer on the Sword of the Spirit

Hugh Latimer on the privilege of calling God our Father.